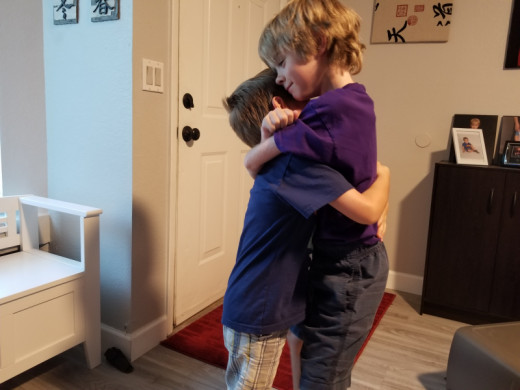 My sons are best friends, but they act like mortal enemies sometimes.

It's usually not long before a playful wrestling match goes from laughing so hard they can barely breathe to screaming at each other and crying because "he hurt me!" This is almost a daily occurrence at my house. I mean come on, you're wrestling, haven't you learned by now that when you wrestle you might get hurt?

Or sometimes during a game of Minecraft they'll be laughing, having fun, building together, and then next thing you know they're screaming at each other and hitting or throwing things because "he burned down my house and killed all my dogs!"

It's times like these that make my blood boil. I am not a naturally patient mom, but I am working on it.

I am trying this new thing (new for me, at least) - waiting quietly and listening. I used to jump in yelling right at the start, I would separate them and start dishing out punishments immediately. But often times I didn't have the whole story and ended up looking more like a rage monster than a critical thinking mom who was raising problem solving men.

When my boys fight, it brings out the worst in me. It's not their fault, it's mine, and I'll own that. But it is my job and responsibility as their mother to point them in the right direction, show them the way to act, so that when they grow up they won't be lost (Proverbs 22:6). This isn't an easy task though. It takes intention and consistency. (read my article Intentional Parenting)

I started with a conversation. During a time of peace and not strife, I told my boys that I want them to figure things out on their own; to solve their own problems and work on making peace together rather than making war. I also told them not to act in a way that resembles a toddlers temper tantrum when their brother doesn't do what they want him to do. My boys are old enough to understand that tantrums are embarrassing and inappropriate. And they agreed that they didn't want to act that way and they would try and be better.

But when the moment comes, they are sure quick to scream, and kick, and throw that tantrum.

And that moment seems to always come.

In that moment, if it starts while I am not in the room, I just wait and listen. Sometimes it's just screaming, other times it's crying. I just wait. I have learned to discern the different cries and screams of my boys. There's the frustrated cry, the hurt cry, the sad cry. And the rage scream, the hurt scream, and the control scream. If I hear slapping, punching, or banging, I always jump in and intervene right away. I want them to know how serious that violence and physical aggression is and that it's never tolerated in our home.

Sometimes, while I wait and listen, I can hear them talking it out. They get over it and the offense is quickly forgotten.

Sometimes it only escalates. I wait and listen close, but out of view. I don't want their words or actions to be influenced by my presence. I want to see how they handle it when they are on their own. This gives me the fuel I need to properly correct, teach, and guide them later on, during our follow up conversation about the situation (read my article Redemptive Discipline). If it continues to escalate with no sign of appropriate resolution, I step in.

"Hey guys, I noticed you're having a hard time communicating. What's going on?"

I get both sides of the story, each boy gets to tell me what happened without their brother interrupting. This is the best way to get the whole story told from two different perspectives (plus I was listening in without their knowledge and have a more broad understanding). Usually they are both to blame for the escalation, but it always starts with one ill-willed comment or action.

Once we get down to the bottom of it, to where it all started, we start the apologies. The offender goes first, then the offended apologizes for their inappropriate reactions as well.

I'm hoping that once they learn how to determine when and how a fight gets started, they will be better at either stopping it from escalating, or preventing it all together. I want them to be motivated by love and respect for each other, not selfishness and pride.

I will help them word their apology if they need help (I am teaching them after all).

"I am sorry that I (insert offense here). You are my brother and I love you. I don't want to hurt you or make you feel unloved."

Sometimes, if there was a name calling involved - "I know that you aren't (stupid, annoying, dumb), I said that because (I was mad, you cheated on the game, you kicked me, etc). I am sorry."

During an apology, I have my boys stand face to face and use a sincere tone of voice. I want them to learn to mean it and take it seriously.

I have trained my boys not to just say "it's OK" in response to an apology, because sometimes it's not OK.

If someone hits you or calls you a name, but then apologizes, that doesn't make "it" "OK" to name call or hit. "It" referring to the offense and "OK" meaning acceptable or reasonable. To forgive someone is right, but you don't have to say "it's OK." That's sort of like saying "your offense against me was reasonable."

Instead of saying "it's OK," I have trained them to respond with something like "I forgive you, but it's not OK, please don't ever do that again. I don't like being treated like that."

That way, they are standing up for themselves, letting the people around them know how they want to be treated, and being kind at the same time.

They need to learn how to resolve conflict on their own. As parents, we won't be there to solve all of their arguments and disputes in the real world. It's our job as parents to make the here and now a safe learning environment. 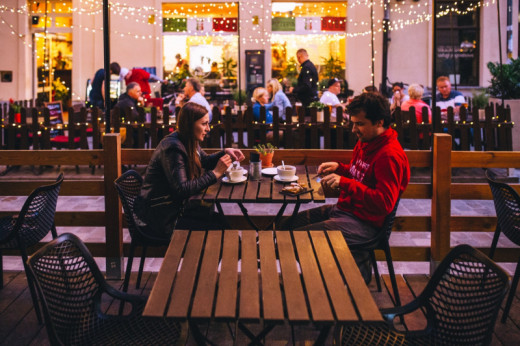 Why you should keep dating your spouse after having kids